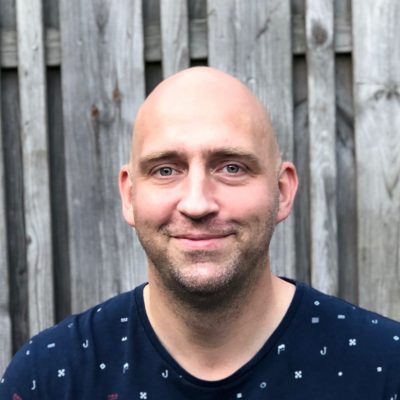 Around the age of 8 I got my first computer, the Commodore 64. At first I was only playing games, but soon after I started learning Basic. After writing my first print and goto lines I was really amazed to see my own name repeat itself on the screen ;), even more so after I learned how to create sound and sprites.

My dad was a avid cyclist and after every ride he wrote down the weather conditions, distance, etc. I figured it would be cool to create a program for him. I basically made a little spreadsheet program which was controlled by the keyboard and joystick. The coolest thing I made was the intro animation for the program, it was a hot air balloon that was moving on the screen which had “Bicycle” written on it . I can’t really remember if it was possible to save data to disk … it probably wasn’t ;).

At elementary school I became friends with another guy who liked to program, we spent many days together playing games and learning programming together, also trying to learn some english because we had some c64 magazines in english.

When we finally got a computer in elementary school my friend and I got really excited. It was a good old MSX. We talked with a teacher about how we input basic programs on the c64. soon after we spent many hours after school to program the MSX with some games and programs.

When I was in high school my parents got me a 286 PC. I mainly played a lot of games like Larry, Commander Keen, Wing commander Monkey Island etc. I also started to enjoy watching cracktros. Some of them I would watch 10 times in a row :).

Around 1992/1993 a friend and I found out that there was a whole scene around making intros and demos. It all started when we saw “Panic” from the future crew. I was so impressed by the music, graphics, programming and how it all fits together perfectly. Soon after I also wanted to create something like that. I knew it was all done in real time but I didn’t have the programming skills to code anything like it. Somehow we discovered Autodesk Animator, a 2D animation package, we created some cool things with it. I soon got interested into making graphics, I started to create pixel art with Deluxe Paint 2 Enhanced.

After school I had some non programming related jobs. I ended up on an internet helpdesk, and eventually became the team lead. As team lead I noticed that our team wasn’t really consistent in the way we solved problems. A colleague and I started by standardizing the troubleshooting procedure. This caused a significant drop in the amount of time it took to solve problems. I later decided to learn PHP and create a website for the troubleshooting procedure, with it we then could easily log the results to the CRM. The software development team noticed what I did and asked if I wanted to become a software developer, I gladly accepted. From then on I started working on the intranet, in which agents could for instance handle order intake, scan/retrieve documents, chat, etc.

After a few years I started working at another company where I made some custom and CMS based website. There I got the chance to become a JAVA Developer. While playing poker with some friends and ex colleagues, I got invited back to my previous company. They needed a JAVA Engineer to program the backend. After talking with the manager I accepted the job. I worked there for a few more years until they decided to outsource the development team to the Ukraine.

Then I started working for a company which made web sites, mobile apps and games. I started working for one of our customers, which was a startup that wanted to make it possible to get a mortgage and mortgage advice online, eliminating the middle man. After 2 years I switched to the mobile team, I had to choose 2 platforms I wanted to program for. My first choice was iOS and my second was Windows, I didn’t choose Android because I figured I already knew JAVA and wanted to learn something new. The first half year I did some maintenance on existing apps and build a windows app, soon after it was clear that Windows Phone wasn’t going to make it, since then I only made iOS apps.