Last week Unite Europe 2017 took place in Amsterdam. For the first time in the history of the conference the opening keynote was at 18:00 the day before the actual conference in the new Amsterdam Theater. By having the keynote at night, the US community could join the live stream during their daytime.

The keynote was not a dry talk about new features. After a short intro-talk a few employees of Mimimi Productions took the stage. They fired up the latest beta version of Unity and showed the audience how to convert their PC game, Shadow Tactics to a free-to-play mobile game, by using the latest features of the Unity Engine and SAAS platform.

Another impressive demo was given by Adam Myhill. He took the assets of the Unity Adam demo and demonstrated the power of Timeline and Cinemachine. He showed how easy it is to setup multiple cameras which track a target. When the target is out of view, another camera takes over automatically, all this is achievable without any coding. By using the timeline you can also easily transition between different types of cameras. The Unity Adam demo short film is worth a watch, you can find it on YouTube.

The actual conference took place at the Westergasfabriek in Amsterdam. The Gashouder was setup as the main expo hall. At the center of the hall was a Unity stand where you could ask questions and get live demos of the new features in Unity 2017.1. Surrounding the Unity stand there were a lot of other companies showed their VR demos, games, and Unity plugins.

Outside there were three domes where people could showcase their “Made with Unity” games. It was really nice to meet some of them and to get inspired by the games they made.

Since there were so many interesting tracks to choose from, I decided to focus most of my time on Augmented Reality (AR) and Virtual Reality (VR). There were some talks from Unity, Oculus and Microsoft that explained the best practices to develop for VR/AR. There were also talks from Nvidia and Unity about performance enhancements, specifically for VR.

There was a talk from some engineers from the Volkswagen Virtual Engineering Lab, they showed how AR and VR is being used within the company. They for instance used Unity to visualize pre-computed airflow data. They also used a Hololens (with augmented reality), so designers could for instance change some colors and other properties on a clay model of a car. 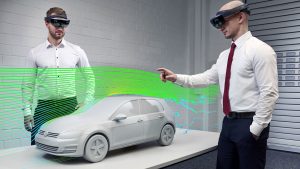 Another really impressive use of Unity in visualizing large data sets was done by an energy company from Australia. The company operates in an area seven times as big as the UK. As you can imagine manually inspecting the power lines would take a lot of manpower, time and money. To make the process easier they use two airplanes to collect LIDAR (Light Detection and Ranging) data of their operating area. An AWS cluster analyzes the generated point cloud, and detects vegetation, buildings and power lines. Other algorithms then do a risk assessment on for instance trees and branches that grow too close to a power line. In Unity they can then inspect high risk areas and decide whether they need to send somebody for manual inspection.

For a small impression on the amount of data that they analyze, see the below video. The airplanes take about eight months to map the whole area.

While all this is really impressive, nothing beats swinging some lightsabers in VR 😉