The conference started with a noteworthy keynote by Daniel Jalkut, founder of Red Sweater (developer of MarsEdit) and active member of the iOS community. Daniel’s talk was about the history of programming languages used by Apple since the start of the company and its latest offspring and “big new language” Swift, introduced in 2014. We were amazed how many different programming languages Apple tried to push over the years. Some of them succeeded while others have (luckily) been long forgotten. 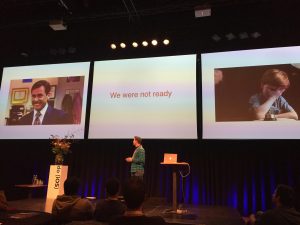 There was also an interesting talk by Pim Stolk, iOS developer since 2008 and working at the ING for the past five years. Pim gave some insight on the banking app from ING, one of the most popular iOS apps in the Netherlands and praised for its usability. The code base of this app consists of over one million lines of code and has been worked on by more than 40 developers over the course of a few years. The speaker took us on a journey from being a single track application to becoming a scalable and flexible application that easily adopts new features and platforms, like the Apple Watch.

There were more talks, but unfortunately they where a bit too short to our liking, as some of them only lasted 25 minutes. Also we felt the many talks of the conference lacked technical depth and insight, perhaps a suggestion for the next edition.

Overall the conference was OK to get a nice overview of a broad range of topics (from security to animations), especially for people new to the platform and junior developers. It was really nice nevertheless to meet members from the iOS community and great to speak with like-minded developers. All in all we still went home with some food for thought, which is the point anyway of attending conferences, right?

Doing do { iOS } in Amsterdam